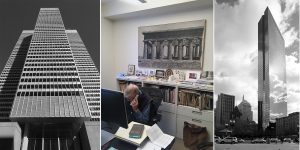 With the passing away of Henry N. Cobb on March 2nd, 2020, North American architecture has lost one of his most respected professionals—a man acclaimed for his designs as well as for his human dimension.

A native of Boston in 1926, and a graduate of Harvard University’s School of Design in 1947. He was exposed to a new Bauhaus-derived pedagogy at the time of Walter Gropius’ direction, but also to other forms of modernist discourse: from the writings of Le Corbusier to the aphorisms of Mies van der Rohe, who famously saw in architecture “powerful ethics as much as an aesthetic.” Gropius put the emphasis on the social potential of high-rise buildings, as illustrated in Cobb’s diploma thesis for a cluster of housing towers. One of his instructors was Ieoh Ming Pei, with whom he would later create a successful architectural firm in New York.

It was on February 19, 2019 that I met Mr. Harry Cobb in his apartment, on the ground-floor of a prewar building on Manhattan’s East 78th Street in. Although I was planning to interview him specifically about his experience in the making of Place Ville Marie in Montréal (1955-62), and his theories on the skyscrapers, the talk gave way to a comparative analysis of Place Ville Marie and the John Hancock Tower, which was built later in Boston (1967-76), and remained the structure of which Harry was the proudest, as shown by all his writings. If the Montreal tower was left without a single award, the Boston one won no less than five awards.

Throughout his professional lifetime, Henry Cobb was either the lead designer, or part of the team of designers, in 18 cases of high-rise buildings (1). These 18 towers received a total of 47 awards. Among them, not more than 6 have Cobb as the lead designer. For the other 12, he was an active member of the team at work on the design, which included 2 architects, except for Palazzo Lombardia in Milan, for which they were 4 of them. Only 5 buildings among these 18 never received an award: 3 in the category of collaborative design and 2 for which he was a solo designer. In the category of collaborative designs, the Bank of China on Bryant Park in New York (2010–16) received a total of 9 awards. In the category of buildings for which Henry Cobb was the solo designer, the John Hancock Tower has a total of five awards. One wonders why the Place Ville Marie ensemble, which has become one of the most iconic landmarks of postwar modernism in Montreal and in fact in Canada, with its characteristic as first cruciform structure combining several programs, never received any recognition.

These two buildings have undoubtedly become turning point page in Cobb’s carrier. Yet, according to the theory he has proposed, these two buildings cannot be considered as skyscrapers, as they don’t really generate a skyline, and don’t “scrape the sky”. Strangely enough, as Harry Cobb affirmed in the February 2019 interview, Place Ville Marie was only “a very large building,” (2). For him, the Montréal scheme was a self-referential building, an autonomous entity governed by internal systems (3). On the other hand, the John Hancock Tower had been shaped by the contingent determinants of its delicate historic context, in particular Henry Hobson Richardson’s Trinity Church.

The John Hancock commission for a skyscraper had been first given to Pei in the 1950s, and he proposed a set of two buildings on Copley Plaza. After the client rejected this scheme in 1966, requesting a single object on the site, Cobb took the responsibility of the design. His initial proposal was unanimously rejected at first by the local community, as it did not address the historical context. Later, it would be submitted to a heated critique of Boston’s public opinion, as the glass façade panels started falling down one after the next. It took complex legal and technical expertise to finally clear the reputation of the architect.

The earliest awards were specifically dedicated to the building itself, but to the materials it used, and to its urban parti. It received the Prestressed Concrete Institute Award in 1973 and the Annual Award on the Highway & Its Environment, for John Hancock Place Garage, in 1976 and its setting in the urban fabric of Boston. In 1983 it received the Harleston Parker Medal of the Boston Society of Architects, dedicated to architects who built monuments or building considered as the beautiful piece of architecture within Boston and its Metropolitan Area. Considering that the reputation of this building had been primarily smeared by the façade fiasco, one wonders whether these awards were not, in the end, some symbolic compensations.

Back to the history of the firm born in 1955, and in which Pei, Cobb and James I. Freed were the founding partners, the Place Ville Marie was unquestionably the first high-rise building erected by the office, under the direct responsibility of Cobb, as Pei was then busy traveling for other urban planning projects. Beyond this division of projects between partners—Freed being particularly engaged in the design of housing—Pei has engaged the building of cultural edifices and of high-rise structures arranged in groups: he assembled for instance three towers framing a plaza at Society Hills in Philadelphia (1964) and University Plaza in New York (1967). It is difficult to ascertain if Cobb was influenced by his senior or whether it went the other way around. It is obvious, however, that the first two designs of Henry N. Cobb had a determining role for the firm at large. The towers for Montréal and then for Boston paved the way for the later award-winning projects of a by now legendary team.